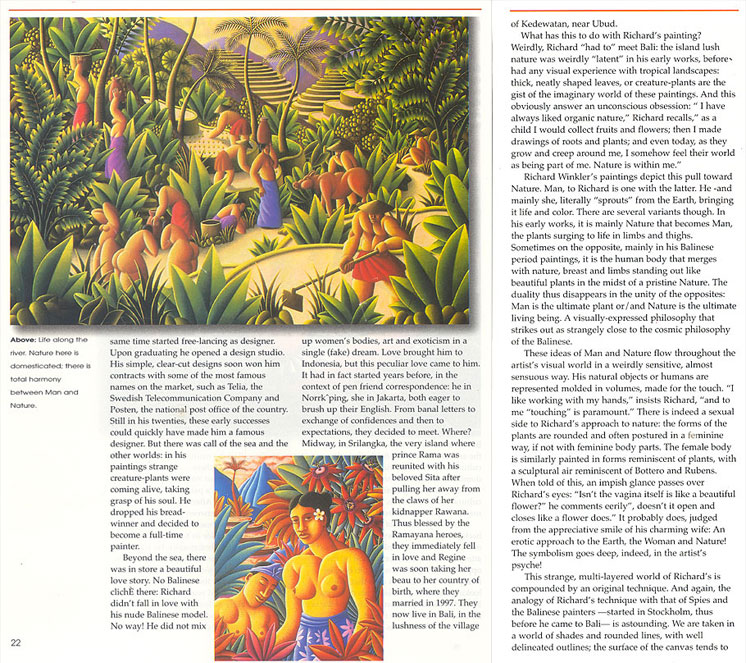 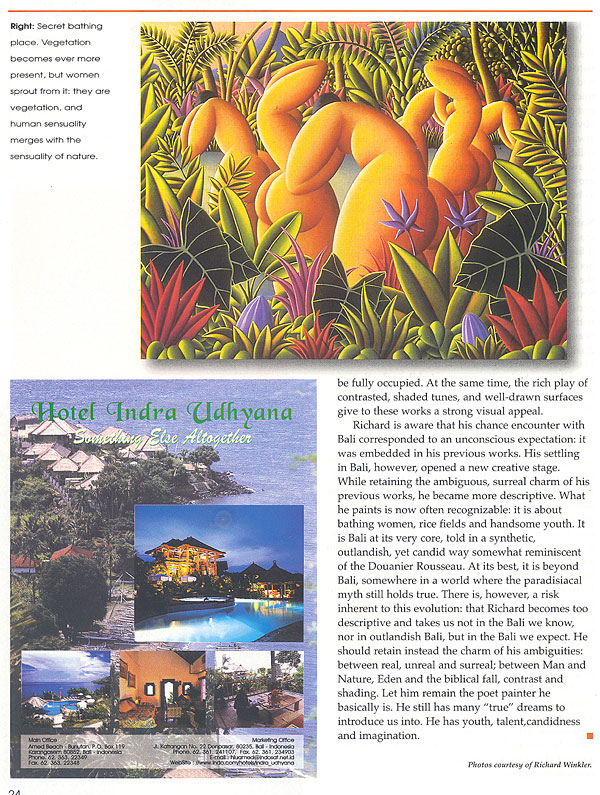 A Dreamworld of Man and Nature

Bali has for generations provided foreign artists with a rich pool of images. Nieuwenkompft, Walter Spies, Le Mayeur, Bonnet, Blanco and many others have filled their paintings with Balinese landscape, lush vegetation, women dances and colorful ceremonies. By Jean Couteau.

To some the visual appeal was so overwhelming that it became a scourge. In their work, women’s bosoms, barong magical eyes and flashy legong costumes were more important than their own inner self. By succumbing to the exoticism of Bali, these artists cast aside at the same time the fundamental questioning attitude that is underlying Western art while being unable to assimilate the lessons in meaning given them by their Eastern host. But isn’t the whole trend of Orientalism, in the arts as in any other fields, that of a cultural misunderstanding? Isn’t it a form of domination, at its best an “objectification” of the other camouflaged as an illusion of cultural communication. And isn’t it the very reason why it sells so well.

It is partly because of the “Orientalist” background to the presence of Western artists in Bali that Richard Winkler warrants our attention. His is a demonstration by the opposite. Living and working in Bali he brings us a world of his own that, while looking Balinese, preexisted his discovery of Bali where it fully bloomed amongst the rice fields and forest of the island.

Richard Winkler was born in 1969 in Sweden, where the long nights of winter have always had its people dream of goblins and fairy stories and where a playwright like Strindberg and a movie director like Bergman have delved pleasurably in the qualms of the intimate. The imaginary, in this country of firs, lakes and snow, is, like in the other countries of the far North, to be found mainly within the self. So too with Richard, although to the role of the dreams one ought to add also that of the sea, ever present in Richard’s birthplace of Norrk^ping. And with the sea came the call of the many worlds beyond it Bali being one of them….

As a child Richard Winkler was inspired by his grand-father, a painter, who gave him his first art lessons. After Hight School, Richard followed between 1990 and 1993 the courses of the Beckmans School of Design in Stockholm, reputed for its teaching of avant-garde design and photography. He learned there, in the tradition of the Bauhaus, how to create forms and object with a strong visual appeal, a lesson no lost in his present day work. On the second year of design school, Richard Winkler picked up painting. He even skipped lessons in advertising to follow private courses in model drawing. At the same time started free-lancing as designer. Upon graduating he opened a design studio. His simple, clear-cut design soon won him contracts with some of the most famous names on the market, such as Telia, the Swedish Telecommunication Company and Posten, the national post office of the country. Still in his twenties, these early successes could quickly have made him a famous designer. But there was call of the sea and the other worlds: in his paintings strange creature-plants were coming alive, taking grasp of his soul. He dropped his breadwinner and decided to become a full time painter.

Beyond the sea, there was in store a beautiful love story. No Balinese cliché there: Richard didn’t fall in love with his nude Balinese model. No way! He did not mix up women’s bodies, art and exoticism in a single (fake) dream. Love brought him to Indonesian, but this peculiar love come to him. It had in fact started years before, in the context of pen friend correspondence: he in Norrk^ping, she in Jakarta, both eager to brush up their English. From banal letters to exchange of confidences and then to expectations, they decided to meet. Where? Midway, in Srilangka, the very island where prince Rama was reunites with his beloved Sita after pulling her away from the claws of her kidnapper Rawana. Thus blessed by the Ramayana heroes, they immediately fell in love and regine was soon taking her beau to her country of birth, where they married in 1997. They now live in Bali, in the lushness of the village of Kedewatan, near Ubud.

What has this to do with Richard painting? Weirdly, Richard “had to” meet Bali: the island lush nature was weirdly “latent” in his early works, before had any visual experience with tropical landscape: thick, neatly shaped leaves, or creature plants are the gist of the imaginary world of these paintings. And this obviously answer an unconscious obsession: “I have always liked organic nature,” Richard recalls, “as a child I would collect fruits and flowers; then I made drawings of roots and plants; and even today, as they grow and creep around me, nature is within me.”

Richard Winkler’s paintings depict this pull toward Nature. Man, to Richard is one with the latter. He and mainly she, literally “sprouts” from the Earth, bringing it life and color. There are several variants though. In his early works, it is mainly Nature that becomes Man, the plants surging to life in limbs and thighs. Sometimes on the opposite, mainly in his Balinese period paintings, it is the human body that merges with nature, breast and limbs standing out like beautiful plants in the midst of a pristine Nature. The duality thus disappears in the unity of the opposites: Man is the ultimate plant or/and Nature is the ultimate living being. A visually expressed philosophy that strikes out as strangely close to the cosmic philosophy of the Balinese.

These ideas of Man and Nature flow throughout the artist’s visual world in a weirdly sensitive, almost sensuous way. His natural objects or humans are represented molded in volumes, made for the touch. “I like working with my hands,” insists Richard, “and to me” touching “is paramount.” There is indeed a sexual side to Richard’s approach to nature: the forms of the plants are rounded and often postured in a feminine way, if not with feminine body parts. The female body is similarly painted in forms reminiscent of plants, with a sculptural air reminiscent of Bottero and Rubens. When told of this, an impish glance passes over Richard’s eyes: “Isn’t the vagina itself is like a beautiful flower?” he comments eerily”, doesn’t it open and closes like a flower does.” It probably does, judged from the appreciative smile of his charming wife: An erotic approach to the Earth, the Woman and Nature! The symbolism goes deep, indeed, in the artist’s psyche!

This strange, multi-layered world of Richard’s is compounded by an original technique. And again, the analogy of Richard’s technique with that of Spies and the Balinese painters – started in Stockholm, thus before he come to Bali-is astounding. We are taken in a world of shades and rounded lines, with well delineated outlines; the surface of the canvas tends to be fully occupied. At the same time, the rich play of contrasted, shaded tunes and well-drawn surfaces give to these works a strong visual appeal.

Richard is aware that his chance encounter with Bali corresponded to an unconscious expectation: it was embedded in his previous works. His settling in Bali, however, opened a new creative stage. While retaining the ambiguous, surreal charm of his previous works, he became more descriptive. What he paints is now often recognizable: it is about bathing women, rice fields and handsome youth. It is Bali at its very core, told in a synthetic outlandish, yet candid way somewhat reminiscent of the Douanier Rousseau. At its best, it is beyond Bali, somewhere in a world where the paradisiacal myth still holds true. There is, however, a risk inherent to this evolution: that Richard becomes too descriptive and takes us not in the Bali we expect. He should retain instead the charm of his ambiguities: between real, unreal and surreal; between Man and Nature, Eden and the biblical fall, contrast and shading, let him remain the poet painter he basically is. He still has many “true” dreams to introduce us into. He has youth, talent, candidness and imagination.