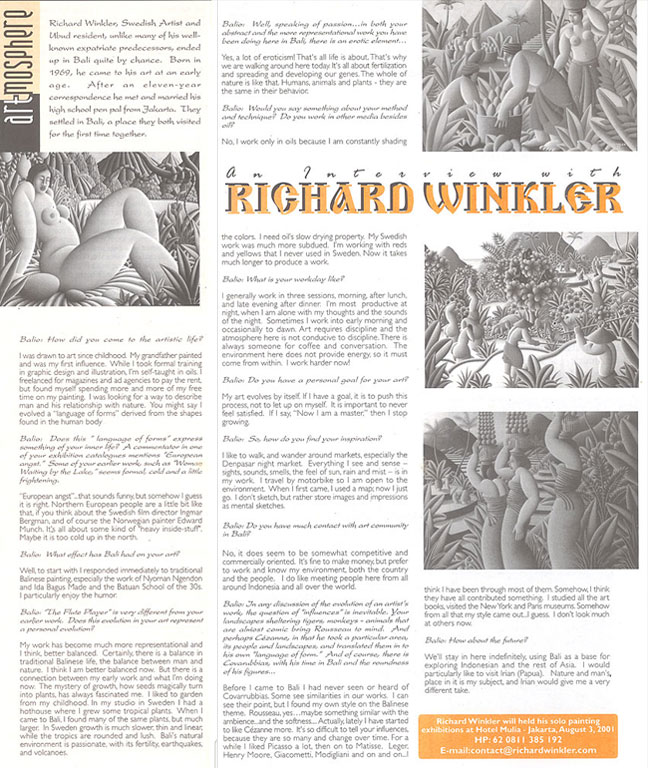 Richard Winkler, Swedish Artist and Ubud resident, unlike many of his well known expatriate predecessors, ended up in Bali quite by chance. Born in 1969, he came to his art at an early age. After an eleven-year correspondence he met and married his high school pen pal from Jakarta. They settled in Bali, a place they both visited for the first time together.

Balio: How did you come to the artistic life?
I was drawn to art since childhood. My grandfather painted and was my first influence. While I took formal training in graphic design and illustration, I’m self-taught in oils. I freelanced for magazines and ad agencies to pay the rent, but found myself spending more and more of my free time on my painting. I was looking for away to describe man and his relationship with nature. You might say I evolved a “language of forms” derived from the shapes found in the human body

Balio: Does this “language of forms” express something of your inner life? A commentator in one of your exhibition catalogues mentions” European angst” Some of your earlier work, such as Woman Waiting by the Lake “ seems formal, cold and a little frightening.
“European angst”…. that sounds funny, but somehow I guess it is right. Northern European people are a little bit like that, if you think about the Swedish film director Ingmar Bergman, and of course the Norwegian painter Edward Munch. It’s all about some kind of “heavy inside-stuff”. Maybe it is too cold up in the north.

Balio: What effect has Bali had on your art?
Well, to start with I responded immediately to traditional Balinese painting, especially the work of Nyoman Ngendon and Ida Bagus Made and Batuan School of the 30s. I particularly enjoy the humor.

Balio: “The Flute Player” is very different from your earlier work. Does this evolution in your art represent a personal evolution?
My work has become much more representational and I think, better balanced. Certainly, there is a balance in traditional Balinese life, the balance between man and nature. I think I am better balance now. But there is a connection between my early work and what I’m doing now. The mystery of growth, how seeds magically turn into plants, has always fascinated me. I liked to garden from my childhood. In my studio in Sweden I had a hothouse where I grew some tropical plants. When I came to Bali, I found many of the same plants, but much larger. In Sweden growth is much slower, thin and linear. While the tropics are rounded and lush. Bali’s natural environment is passionate, with its fertility, earthquakes, and volcanoes.

Balio: would say something about your method and technique? Do you work in other media besides oil?
No, I work only in oils because I am constantly shading the colors. I need oil’s slow drying property. My Swedish work was much more subdued. I’m working with reds and yellows that I never used in Sweden. Now it takes much longer to produce a work.

Balio: What is your workday like?
I generally work in three sessions, morning, after lunch and late evening after dinner. I’m most productive at night, when I am alone with my thoughts and the sounds of the night. Sometimes I work into early morning and occasionally to dawn. Art requires discipline and the atmosphere here is not conducive to discipline. There is always someone for coffee and conversation. The environment here does not provide energy, so it must come from within. I work harder now!

Balio: Do you have a personal goal for your art?
My art evolves by itself. If I have a goal, it is to push this process, not to let up on myself. It is important to never feel satisfied. If I say, “Now I am a master,” then I stop growing.

Balio: So, How do you find your inspiration?
I like to walk, and wander around markets, especially the Denpasar night market. Everything I see and sense-sights, sounds, smells, the feel of sun, rain and mist- is in my work. I travel by motorbike so I am open to the environment. When I first came, I used a map; now I just go. I don’t sketches, but rather store images and impressions as mental sketches.

Balio: Do you have much contact with art community in Bali?
No, it does seem to be somewhat competitive and commercially oriented. It’s fine to make money, but prefer to work and know my environment, both the country and the people. I do like meeting people here from all around in Indonesia and all over the world.

Balio: In any discussion of the evolution of an artist’s work, the question of “influences” is inevitable. Your landscapes sheltering tigers, monkeys – animals that are almost comic bring Rousseau to mind. And perhaps Cezanne, in that he took a particular area, its people and landscapes, and translated them in to his own “language of form.” And of course, there is Covarubbias, with his time in Bali and the roundness of his figures….
Before I come to Bali I had never seen or heard of Covarrubbias. Some see similarities in our works. I can see their point, but I found my own style on the Balinese theme. Rousseau, yes… maybe something similar with the ambience …and the softness….Actually, lately I have started to like Cezanne more. It’s so difficult to tell your influences, because they are so many and change over time. For a while I liked Picasso a lot, then on to Matisse. Leger, Henry Moore, Giacometti, Modigliani and on and on….I think I have been through most of them. Somehow, I think they have all contributed something. I studied all the art books, visited the New York and Paris museums. Somehow from all that my style came out ….I guess. I don’t look much at others now.

Balio: How about the future?
We’ll stay in here indefinitely, using Bali as a base for exploring Indonesian and the rest of Asia. I would particularly like to visit Irian (Papua). Nature and man’s place in it is my subject, and Irian would give me a very different take.