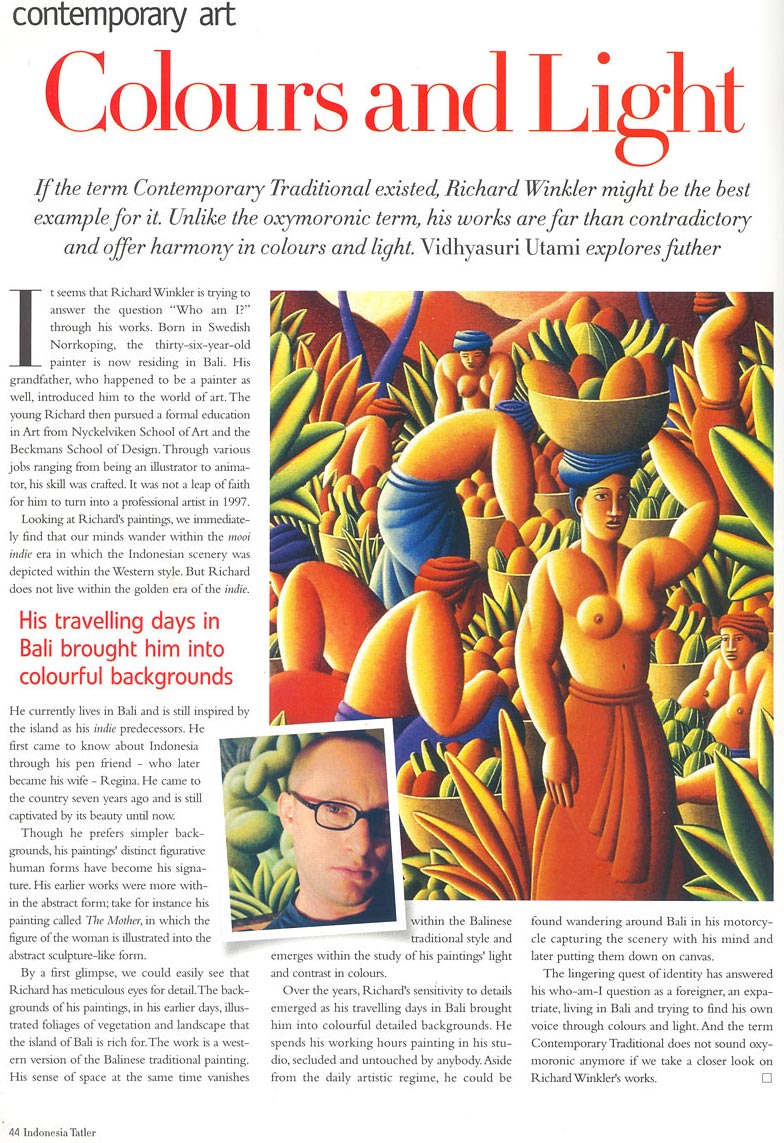 If the tern Contemporary Traditional existed, Richard Winkler might be the best example for it. Unlike the oxymoronic term, his works are far than contradictory and offer harmony in colours and light. Vidhyasuri Utami explores further

It seems that Richard Winkler is trying to answer the question “Who am I?” through his works. Born in Swedish Norrköping, the thirty-six-year-old painter is now residing in Bali. His grandfather, who happened to be a painter as well, introduced him to the world of art. The young Richard then pursued a formal education in Art from Nyckelviken School of Art and the Beckmans School of Design. Through various jobs ranging from being an illustrator to animator, his skill was crafted. It was not a leap of faith for him to turn into a professional artist in 1997.

Looking at Richard’s paintings, we immediately find that our minds wander within the mooi indie era in which the Indonesian scenery was depicted within the Western style. But Richard does not live within the golden era of the indie.

His travelling days in Bali brought him into colourful backgrounds

He currently lives in Bali and is still inspired by the island as his indie predecessors. He first came to know about Indonesia through his pen friend – who later became his wife – Regina. He came to the country seven years ago and is still captivated by its beauty until now.

Though he prefers simpler backgrounds, his paintings’ distinct figurative human forms have become his signature. His earlier works were more within the abstract form; take for instance his painting called The Mother, in which the figure of the woman is illustrated into the abstract sculpture-like form.

By a first glimpse, we could easily see that Richard has meticulous eyes for detail. The backgrounds of his paintings, in his earlier days, illustrated foliages of vegetation and landscape that the island of Bali is rich for. The work is a western version of the Balinese traditional painting. His sense of space at the same time vanishes within the Balinese traditional style and emerges within the study of his paintings’ light and contrast in colours.

Over the years, Richard’s sensitivity to details emerged as his travelling days in Bali brought him into colourful detailed backgrounds. He spends his working hours painting in his studio, secluded and untouched by anybody. Aside from the daily artistic regime, he could be found wandering around Bali in his motorcycle capturing the scenery with his mind and later putting them down on canvas.

The lingering quest of identity has answered his who-am-I question as a foreigner, an expatriate, living in Bali and trying to find his own voice through colours and light. And the term Contemporary Traditional does not sound oxymoronic anymore if we take a closer look on Richard Winkler’s works.