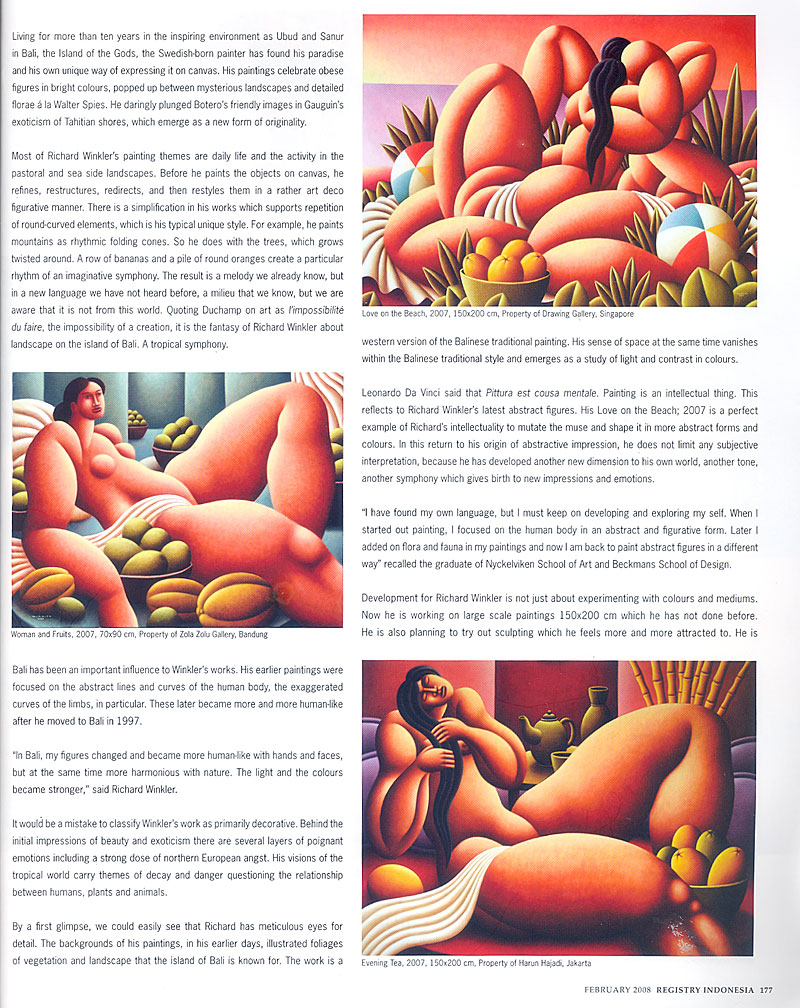 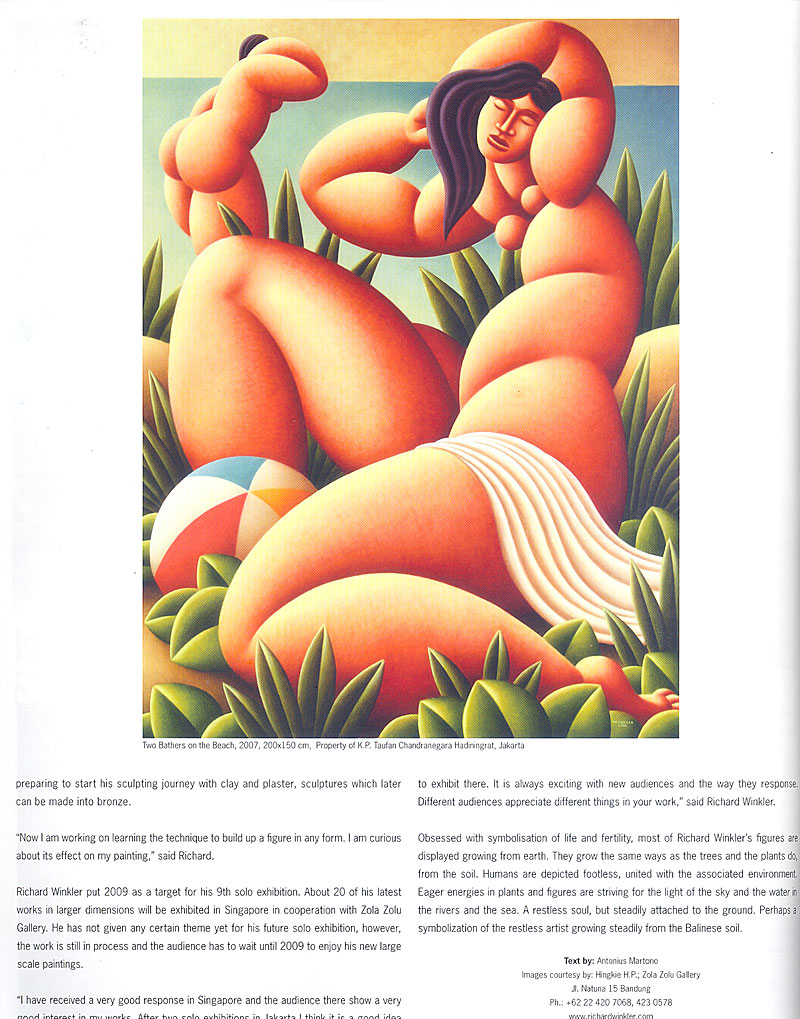 Bather by the Sea, 2007, 150×200 cm, Property of Harun Hajadi, Jakarta.
The magic moment between words and motion.
When everything is still.
There is no time, only silence.
A moment of loneliness.
A moment of weakness, but also,
a moment of strength.
All together, all alone.

The verses may represent the anxious soul of Richard Winkler and on how he grasps and explores the daily life on the exotic island of Bali. He sees the natural elements like flowing tones of Mozart’s Compositions. From his visual memories he works out poetic impressions on the canvases. The analogy of painting and music is clearly seen in Richard Winkler’s works, where rhythm in nature and the human form is translated to a visual musical composition. He seems to hear tones beyond the natural ones which are associated with his projects while they are demonstrating their activity. He calls it as The moment of Silence, a moment which is alive, full of notes, each in its own solitude, but joined together in a majestic symphony.

Living for more than ten years in the inspiring environment as Ubud and Sanur in Bali, the island of the Gods, the Swedish – born painter has found his paradise and his own unique way of expressing it on canvas . His paintings celebrate obese figures in bright colour, popped up between mysterious landscapes and detailed florae a la Walter Spies. He daringly plunged Botero’s friendly image in Gauguin’s exoticism of Tahitian shores, which emerge as a new form of originality.

Most of Richard Winkler’s painting themes are daily life and the activity in the pastoral and sea side landscapes. Before he paints the objects on the canvas, he refines, restructures, redirects, and then restyles them in a rather art deco figurative manner. There is a simplification in his works which supports repetition of round-curved elements, which is his typical unique style. For examples, he paints mountains as rhythmic folding cones. so he does with the trees, which grows twisted around. A row of bananas and a pile of round oranges create a particular rhythm of an imaginative symphony. The result is a melody we already know, but in a new language we have not heard before, a milieu that we know, but we are aware that it is not from his world. Quoting Duchamp on art as I’impossibilite du faire, the impossibility of creation, it is the fantasy of Richard Winkler about landscaped on the island of Bali. A tropical symphony.

Bali has been an important influence to Winkler ‘s works . His earlier paintings were focused on the abstract lines and curves of the human body, the exaggerated curves of the limbs, in particular. These later become more and more human likes-after he moved to Bali in 1997.

“In Bali, my figures changed and become more human-like with hands and faces, but at the same time more harmonious with nature. The light and the colours become stronger,” said Richard Winkler.

It would be a mistake to classify Winkler’s work as primarily decorative. Behind the initial impressions of beauty and exoticism there are several layers of poignant emotions including a strong dose of northern European angst. His visions of the tropical world carry themes of decay and danger questioning the relationship between humans, plants and animals.

By a first glimpse, we could easily see that Richard has meticulous eyes for detail. The backgrounds of his paintings, in his earlier days, illustrated foliages of vegetation and landscape that the island of Bali is known for . The work is a western version of the Balinese traditional painting. His sense of space at the same time vanishes within the Balinese traditional style and emerges as a study of light and contrast in colours.

Leonardo Da Vinci said that Pittura est cousa mentale . Painting is an intellectual thing. This reflects to Richard Winkler’s latest abstract figures. His Love on the Beach; 2007 is a perfect example of Richard’s intellectuality to mutate the muse and shape it in more abstract forms and colours. In this return to his origin of abstractive impression, he does not limit any subjective interpretation, because he has developed another new dimension to his own world, another tone, another symphony which gives birth to new impressions and emotions.

‘I have found my own language, but I must keep on developing and exploring my self. When I started out painting, I focused on the human body in an abstract and figurative form. Later I added on flora and fauna in my paintings and now I am back to paint abstract figure in a different way’ recalled the graduated of Nyckelviken School of art and Beckmans Schools of Design.

Development for Richard Winkler is not just about experimenting with colours and mediums. Now he is working on large scale paintings 150×200 cm which he has not done before. He is also planning to try out sculpting which he feels more and more attracted to. He is preparing to start his sculpting journey with clay and plaster sculptures which later can be made into bronze.

“Now I am working on learning the technique to build up a figure in any form. I am curious about its effect on my painting,” said Richard.

Richard Winkler put 2009 as a target for his 9th solo exhibition. About 20 of his latest work in larger. Dimensions will be exhibited in Singapore in cooperation with Zola Zolu Gallery. He has not given any certain theme yet for his future solo exhibition, however, the work is still in process and the audience has to wait until 2009 to enjoy his new large scale paintings.

“I have received a very good response in Singapore and the audience there show a very good interest in my works. After two solo exhibitions in Jakarta I think it is a good idea to exhibit there. It is always exciting with new audiences and the way they response. Different audiences appreciate different things in your work,” said Richard Winkler.

Obsessed with symbolisation of life and fertility, most of Richard Winkler’s figures are displayed growing from earth. They grow the same ways as the trees and the plants do from the soil. Humans are depicted footless, united with the associated environment. Eager energies in plants and figures are striving for the light of the sky and the water in the rivers and the sea. A restless soul, but steadily attached to the ground. Perhaps a symbolization of the restless artist growing steadily from the Balinese soil.