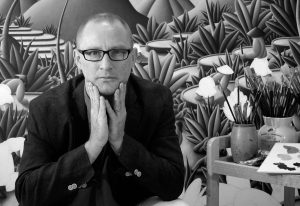 Richard Winkler was born in 1969, Norrköping Sweden. He graduated from the Beckman’s School of Design in Stockholm, where he studied graphic design, advertising and illustration. For a couple of years he was working as an illustrator for advertising and magazines. He also exhibited his paintings, which he worked on between illustration jobs.

In 1997 he moved to Bali, Indonesia, where he now lives with his Indonesian wife and their two daughters. Since his move to Bali he has been working full time as an artist, painting and sculpting, and has had numerous exhibitions. Winkler’s work is a celebration of life and fertility, like a visual poem about the relation of man and nature, struggling and trying to find balance and harmony. All his figures, and the landscape as well, are described in tubular forms with sensual if not erotic undercurrents. Richard works with many thin layers of transparent colors with a glazing technique. This creates deep and intense colors, which has become his signature. Besides painting, Richard also sculpts in plaster. The sculptures are casted in bronze with a limited edition of five.

Since childhood I loved drawing and painting. I spent a lot of time with my grandfather who was my absolute idol in my life. He was a great man who loved to draw and paint, but never had the opportunity to make that passion into a profession. We always spent time drawing together. I admired him very much and tried to copy his hairstyle. And every year on top of my wish list for Santa Claus was always my Grandpa.

Another passion I had was nature. I loved playing in the wild gardens picking fruits and flowers. My grandparents often brought me there for a walk and play. My grandmother was very passionate about flowers and plants and taught me many of the names. I learned to recognize the leaves and flowers. I also grew up nearby an old botanical garden where I always played with my friends. I used to fill up our whole balcony with flowers I picked for my Mom.

During my childhood I also became very aware of my physical body, as I had to do many surgeries at young age because of a rare bone disorder, which was disturbing the growth of my bones. I had to go through quite a lot of pain and many hospital visits with doctors constantly checking on my body. I learnt early that the body and the soul are separated from each other. If your body suffers your soul must still stand strong and find peace. I found beauty around me, in nature, in the human body and in the world.

My artistic career has always been about expressing my private passions and experiences through my work. I have always been searching for the beauty and harmony in the world, in the nature, between man and nature and in life itself.

When I look at art it is important to me that it evokes some kind of feeling, that it grabs me and get hold of my soul. Then it has touched me. Art is all about truth and honesty.

The reason why I moved to Indonesia was because I fell in love with my pen pal since secondary school, Regine. We met in Sri Lanka for the first time during one of my inspiration trips. I had no problem to move to Indonesia because I loved the tropics and felt very excited about the idea to actually move and live there. But back then she was living in Jakarta, and I didn’t want to live there because I needed nature for my inspiration. So we both moved to Bali together. I didn’t know much about the place back then, and I had never been there before I moved. But I loved Bali, we rented a little house and built a very small studio and I started to work quite soon after the move. Two years later I had my first exhibition in Indonesia.

After many years I had the opportunity to realize my other dream – to make sculptures. My paintings were already very sculptural in a way, so it was a natural development for me to do sculpting. For a long time I wanted to see how my figures would turn out in the three dimensional world. It was an idea that had been growing for years. When I got some more space at home I could set up a sculpting studio.

I work with plaster of Paris for the sculpture itself. Then I make a bronze casting with a limited edition of five of each sculpture. I work big, and I work small. Challenge is always important for finding new means of expression.

My long-term goals are to always be true to myself. Follow my own heart and mind and to keep exploring myself through my art. And by the end of my life I hope I have given the world a little piece of my soul and love.